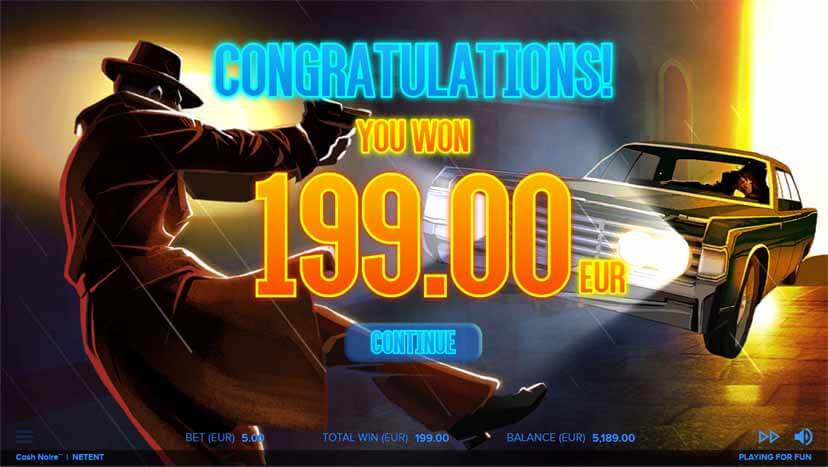 Are you a big fan of slots games with a bit of an attitude to them? Then you should look at Cash Noire. Based on the classic ‘Noire’ style of crime fighting, you’ll be thrust into a world of trilby hats, pieces of paper, taking notes, and solving crimes.

Oh, and given this is a slots game, you’ll also have the chance to win a few bucks along the way!

This NetEnt videoslot has been around for a while now and is known for having over 1,000 ways for you to get a big win. With 5 reels to play for, it’s got enough variety to give you the opportunity of a lifetime to land that big victory.

Though it might seem a bit generic upon first viewing, it’s fair to say that Cash Noire is a fantastically fun experience for just about anyone. It’s got a satisfying style and a very enterprising layout. Based on a mysterious murder, you’ll be using a rather interesting Avalanche mechanic to replace symbols with winning symbols, all of them playing a part in solving the murder mystery.

You’ll also get all manner of mystery symbols that transform as you play, as well as numerous chances to pick up freebies – such as free spins – as you try and hunt down the casino. Play well enough and you might even get to the end of the line in the case and end the hunt for the killer in San Cayetano.

As Detective Flint, you’ll be chasing leads and spins to try and solve two problems at once: your need for a winning case, and your desire for a fatter wallet. With 4 rows and 5 reels you should have no problem in trying to find winning combinations. To win, you need 3 or more symbols that match up on adjacent reels.

On this game, you can bet as little as 20p and as much as £200 per spin. You can also get a bespoke autoplay service that allows you to play ‘set and forget’ slots and win big all the way through. One thing to note about this game, though, is the fact that it has a low variance; this means that overall the game runs with an RTP of just over 96%. So, the house does not have a huge edge in beating you.

The big chances for wins comes from their use of bonus features and also their free spins. Using enough free spins, you have the chance to win 1,033x your stake – on every free spin. Obviously, the chances of that are quite low, but it is possible!

From various symbols that can appear around the city map, you’ll have to try and make your way around the city and solve the crime whilst having the chance for some pretty haughty wins. With the chance to win some big sums of money if you play well, though, this is definitely a game that uses the free spins feature well and to the advantage of the user rather than the house.

In short, this is definitely an investigation worth continuing, detective!