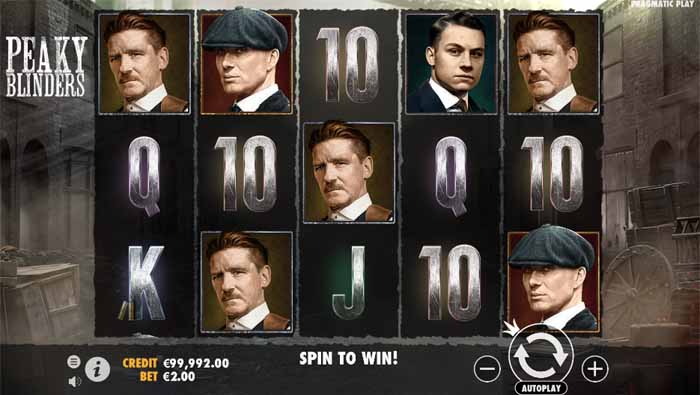 Are you a fan of TV shows turning into games? Then you will be happy to know that this is happening more and more. One of the most popular starting points for TV shows turned into gaming media is Peaky Blinders.

The show is violent, satisfying, exciting, and engaging; you never quite know what is going to happen next. That might be why the Birmingham-based TV show, set just after the First World War, makes such a fun and exciting slots game!

The slots game itself has bene developed for players who are looking for a fun way to access a slots game set in a familiar and exciting world. While many slots games throw us into worlds of ancient and fantasy adventure, this is a touch more grounded. It’s a standard 5×3 system that comes with around 20 paylines for you to pick from, and you simply need 3 or more matching symbols on a payline on adjoining reels to make a successful spin.

With an RTP of 96.5%, too, it is a pretty generous starting place for most people. You have the chance to win some big money, too, giving you a chance to go out and buy yourself one of their fancy flat caps.

The potential winnings are decent, with bets ranging from 20p a spin to £100 per spin depending on how brave you are. You have the chance to win as much as 400x your stake, which gives you the chance to win big if you hit the reels with the highest value symbols.

The design is obviously inspired by the show, with the faces of main characters appearing all the time. The rather dark and brooding soundtrack is quite a fun choice, too. You will find yourself seeing the face of the majority of the major cast, as well as having the chance to land rewards depending on what character shows up. You might be shocked to learn that Tommy Shelby, the shows protagonist, is the one who gives you the highest value wins if he turns up.

Land as many Shelby’s as you can soon see your money flying up by virtue of getting a few famous faces to appear for you. You also get the usual Wild and Scatter style extras, adding even more madness into what is a high intensity slots gaming experience.

You get some interesting modifiers that can pop up as you play, and you will also get some free spins if you keep on playing. It is a relatively simple game and arguably not as volatile as one would expect given the nature of the source material. Overall, though, this is a very fun and satisfying slots game that has all the potential to be a long lasting member of your slots gaming collection.

Whether you like the show or just fancy an escape from the army of Aztec and jungle-themed slots games out there, the Peaky Blinders slots game makes for a most satisfying experience.