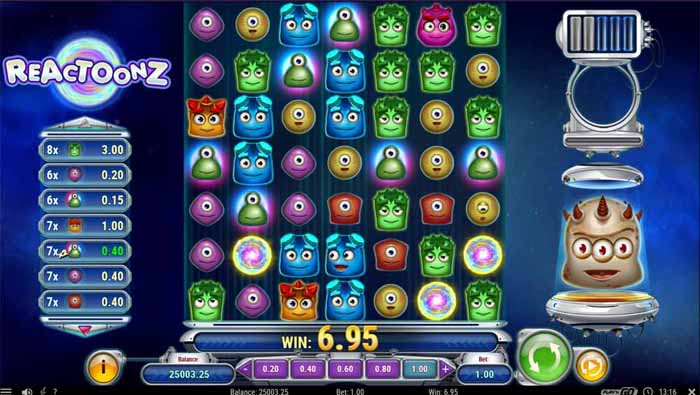 When it comes to playing slot games online, we sure have our fine collection of games to pick from today. Some are extremely simple in their layout and their style, while others are a touch more glamorous and ‘out there’ than others. One such title that suits that particular theme would be Reactoonz 2.

If you are on the lookout for a new slots game to try out, then you might wish to take a look at this particular slot experience. Let’s take a look at why Reactoonz 2 has become such a popular choice on the slots network at the moment.

Putting you back into the googly-eyed world of Reactoonz again, this sequel to the hugely popular original has been well received. Developers Play’n Go have made some big changes, but it retains the original 7×7 layout that so many fans loved in the past. It has some nice payment options, too, giving you the chance to bet as low as 20p per spin or as much as £100 per spin. That gives you good variety in letting you set the severity of your own stakes.

Also, you get a game with an RTP of around 96.2%, which is pretty healthy for a highly volatile slot game. The game itself is built around many of the same themes as the original, with the one-eyed and two-eyed symbols setup returning from the original.

When you get five or more matching symbols that are touching together, then you have the chance to open up what is known as the Cascade side feature. This can see you win anything from 3x to 500x your playing stake.

You also get various symbols to pick from, with classics such as Wild and Scatter symbols appearing at regular intervals. You also will get a lot of symbols, especially the Wilds, giving you interesting parameters depending on what they get paired up with.

Thanks to its diverse collection of games to pick and play through, not least the Cascade feature, you have ample potential to win big if you play it right. It’s tough to explain without you taking part yourself, but you have the chance to have fluctuating wilds that appear from each spin, and you also have a chance for an electric Wild symbol to appear – when the Fluctometer is full, you have 1-3 Wilds on the grid at any time.

They then substitute themselves for any pay symbol, and any non-Wild symbols are then removed from the screen by using the Quantumeter. You need to reach a minimum of 55 charges and a maximum of 135 charges to reach the corresponding level, adding massive multipliers and extras onto your wining chance.

With everything going your way and landing the absolute maximum, you have the chance to win as much as 5,083x your stake if you get it right. It’s a fun game propped up by an exciting and charming interface that makes it fun and exciting to play – what more could you realistically want from a modern videoslots game?

Is it confusing? A little. Is it fun? You bet!

Play Reactoonz 2 for Free or Real