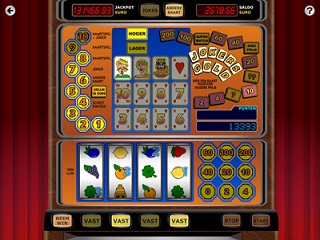 Jokers Gold, the classic slotmachine, has several elements that makes it even more entertaining: the basic game and the Higher/Lower card game with all kinds of prizes, and also the Super Jackpot that increases with every bet and can contain thousands of euros just like that.

The aim of the game is to achieve certain combinations on the reels with pictures that are worth points, and also to be able to play the Higher/Lower card game. There are a lot of points to be earned there. You play with credits; 1 credit is worth € 0,20.

You start playing by clicking on the “Start” button. The basic game is started and the reels start to spin. In the basic game, you play on one payline, with the exception of the ‘target’. They also yield criss-cross points. If a price did not fall immediately, you can hold the reels by clicking on the “Fixed” button below the reel in question. Then you let the other roll(s) run again.

It is also possible for the machine itself to hold rolls if they give a good chance of winning a prize. You can override reel holding by clicking “Restore”. If you have held one or more reels, then this possibility is lacking for the next spider.

If there is a prize, you can gamble the prize on the Jokers Gold gambling ladder or add it to the credits you have won with “Take Win”. By choosing this option the points will be added to your credits.

Mystery number
A total of 4 points starts the Mystery number; the point ladder flashes between 5 and 10 points. With the Stop button you can try to reach at least 8 points and then play the Higher/Lower card game.

Same is good
With a total of 5 points the lamp Same is good lights up. In the Higher/Lower card game, this means that an equal card will result in the next step in the prize ladder.

Other card
For a total of 6 points, the Other card lamp lights up. If the Other Card button in the Higher/Lower deck is pressed, a new card is drawn. This does not result in a next step in the prize ladder.

Joker
A total of 7 or 10 points will cause the Joker light to light up. So there are 2 Jokers possible. If lit, the Joker button can be pressed for an extra step in the card game.

The Higher/Lower card game
The Higher/Lower card game is a game in which you can take steps on the prize ladder by correctly guessing the value of the next card; whether it is higher or lower than the card shown. There are 12 cards in the game: 3, 4, 5, 6, 7, 8, 9, 10, farmer, woman, lord and bait. Select “Higher” by pressing the “Stop” button when the “Higher” light is on. You choose “Bearing” when you press the “Stop” button when the “Bearing” light is on.

There are additional game elements in the card game, which are explained below:

Choose a prize
The seventh step on the prize ladder gives you the opportunity to play the game Pick a prize. In this game four prizes are shown consecutively. You decide which price to choose. If you don’t choose (by pressing the Stop button) you will automatically get the fourth win combination.

Super Match
The tenth step on the prize ladder gives you the opportunity to play the game Super Match. When this game is chosen, the right role starts to rotate. By pressing the Stop button the roll can be stopped. The symbol shown on the winning line determines the height of the prize. The number of equal symbols on the payline is determined at random.

Play a Classic Slot for Real