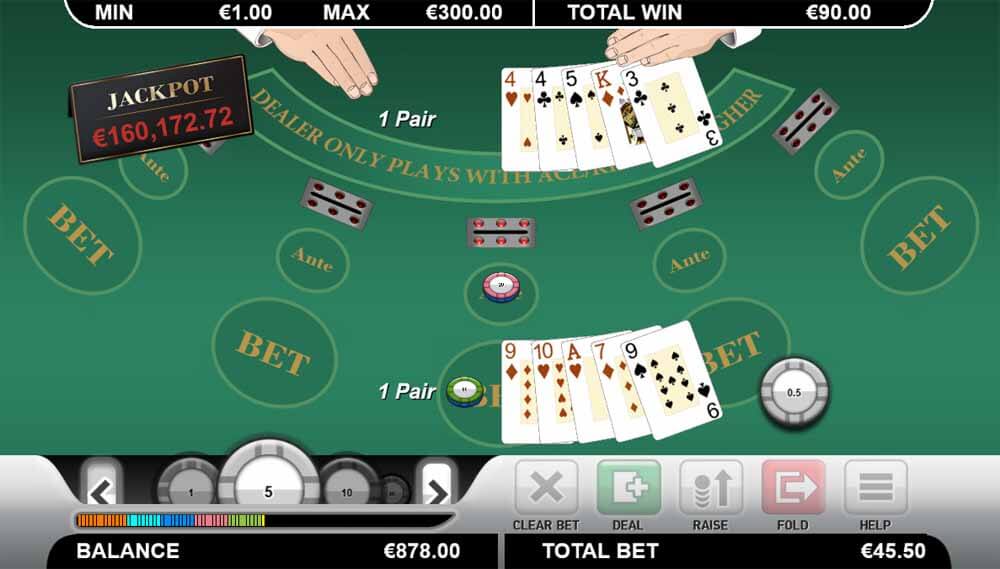 The game originated in casinos on cruise ships. Operators of these casinos were looking for a way to further increase their casino’s revenue. Blackjack had the highest revenue and they wanted to top that. After they figured out the rules, it was an instant hit on all the cruise ships. As the audience on cruise ships is often very international, the game quickly spread to many different countries.

The game Caribbean Stud Poker is very similar to Texas Hold’Em, the classic poker game. You use the same card combinations as Texas Hold’Em. A fundamental difference is that you play against a dealer and not against other players. You don’t have to raise, fold or call.

The odds for the house are on average around 5.3%. This means that about 94.7% of the bets are paid out to the players. It depends on the card combinations you’re able to create how much you’ll get paid.

We have listed this payout for you:

When playing Caribbean Stud Poker, you need to consider a bet and an ante. The first bet you place is the ante. After you have placed the ante, the dealer will give 5 cards to each player. After you have received your cards as a player, the dealer also receives 5 cards. The last of these 5 cards are visible. You must now decide whether to continue or to fold. This is based on your own cards and how good they are and based on the dealer’s cards as well.

You can now “fold” or “bet”. You must make that decision based on the cards you have. They should provide you with sufficient information about how good your hand is. You’re not entirely sure what the dealer has, and that’s the gambling element is. Your “bet” is twice the amount you bet as an ante, so you need to be very sure before placing your bet.

There are different terms when playing Caribbean Stud Poker: